Yagya «The Inescapable Decay Of My Heart» (Kilk Records, 2012) 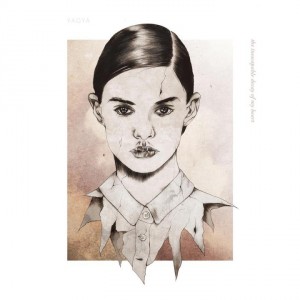 Explain to me how in such a small island country has so many talented musical projects? Sigur Rós, múm, Ólafur Arnalds, Jóhann Jóhannsson, Bjork, Gus Gus — it is only the first names that come to mind. For this cohort, I would put Yagya. This Icelander since 2002 captivates our music lover hearts his incredibly beautiful dubteсhno. The apogee of his music, many people believe the third album under the name «Rigning», which is kind of an ode to rain. I think it would be at least strange to hear such a giant as Yagya another like a record, as well he said in the interview. Despite the recognizable style, Gudmundsson still has not been repeated and each time he pleasantly surprised us.

Even before the official release of «Inescapable Decay Of My Heart» the album provoked mixed reaction in an audience. The main reason for this is vocals and song-oriented conception of the record, as we heard on those short little previews. I don’t have any musical background and I can't estimate it in a professional manner about the production level, here I can only operate with like/dislike- notions, and I damn like this new album. Now let me tell you a terrible thing. Yagya decided to shift the focus of his music to pop music. What! How? Did he really write this word? Guys, let's grow up and put aside this adolescent maximalism. Yes, this album has the vocals, yes, they sound as they supposed to sound in pop music, but they fit so perfectly into the Yagya's dubtechno. By the way his beat became more dense and elastic. «My Star Is A New Song» and «Reverbs And Delays» tracks can be definitely played on the dancefloor, but it won't work previously. All the vocals that we hear in his album are from Iceland if we go by performers names. I wonder how Iceland is so full of talented people, and how many of them are still unknown to us. If the names of female-performers said nothing to me, I was surprised to find out who’s the male vocal owner. This is Gudmundsson personally, he also wrote almost all the lyrics. Basically, this album is above all praise. There's not a single doubtful or weak track, each song is a gem. He's done an outstanding job in my opinion. Songs lyrics, very sensitive in their basis, tell us about emotional experiences, loss of loved ones (Tears Will Fall), and about love of course (Gabriel). After the dynamic middle-part, mood shifts to a more calm way (Bright Moonlit Sky, The Salt On Her Cheeks). During these hot days of July, this part of the album associated in my mind with coolness of Iceland. Finally, Waiting For The Rain brings us back to the Rigning period.

A few words concerning the instrumental version. It includes all tracks from the album even those that initially had music only (Reverbs And Delays, The Salt On Her Cheeks). I’d say you should not have great hopes for it, if you are so abhorrent to vocals. Steiny was right in saying that vocals absence is evident in some tracks. After all, everything here goes round his beautiful songs. So I don't envy those people who refused to let this wonderful album into their hearts. And finally it was only you who made yourself out of the pleasure to hear this new Yagya creation, but not him.