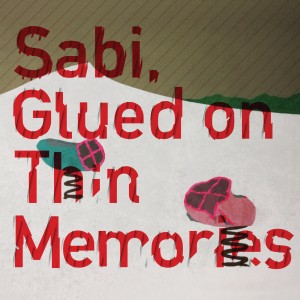 Japanese-British musician and designer Taro Peter Little on idm scene for almost ten years: released several EPs, has appeared on various compilations, worked with other artists, but full-length album is not reached yet. His first album «Glued On Thin Memories» was hateful quintessence of his work. The sound varies from soft idm to ambient in a spirit Secede with small splashes of piano interludes. I'm not vain mentioned Secede, because some of the tracks caused me deja vu, for example, «Three Blind Queens In Cyan» obviously there is something of «Tryshasla», the same languid bass, elements of field recordings and some fantasy happening resemble beautiful country Sanda. In «Screaming Bulb» slightly guessed «Vega Libre», as well as felt analog flavor label Fax +49-69/450464. However, Sabi nevertheless find their original style, bringing more typical idm music elements. For example, the first track «Halfspine» is such a classic idm start 2000th: melodic, with a crunch and fancy beat. In «Mano» everything else we have heard a wonderful female vocals, which is perfectly placed on the electronics. Still, idm in this album is not the first place, Sabi focuses on soft ambient textures, space and depth. In general, the mood of the plate is very relaxing, especially the second half, your cares and worries just evaporate.

The real summer album, and in all respects other than the first LP was a success. The only thing that I am a little confused, because it is a meager artwork. Such music is worth more, in my opinion. If you missed idm era such as Toytronic, early albums Maps And Diagrams and Secede's «Tryshasla» you are always on repeat, the Sabi easily fit into your music now.