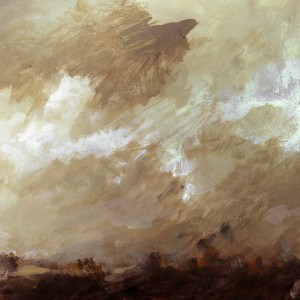 After a little more than ten releases, Sending Orbs, managed to achieve the status of a cult label, and its residents have become heroes of melodic idm. After releasing the Markus Guentner «Doppelgaenger» in 2009, there was a long and extremely tedious silence, possible because of the leaving of one of the label's founder Wouter Eising, as well as the getting PhD by the second owner — Kristian Peters. Several times there was information on their site about returning, even there was announced some collection, devoted the fifth anniversary of the label. But only in August 2012 after the sendingorbs.com was redesigned the new relies was declared. Kettel and Secede already published in 2007 on Merck joint ten-inch, called «Perspeeks», but, nevertheless, it was a split release. This time the duet presents a full length collobarative album titled «When Can».

«When Can» was specially written for the label returning, and guys sifted out about 95% of the tracks, that they have accumulated during working period. In my opinion, the album is very eclectic, that is not pure Secede or pure Kettel, whose albums are consistent in their own way. Here we hear a lot and field records, and a beautiful downtempo, and ambient, and even something of the Baroque era. First, all this diversity is confusing, you trying to catch something, but returning to the album the second or the third time, just dissolving into the music and it seems that it couldn’t be in another way. It seemed to me, in «When Can» the duet tried to use the same method of constructing like in «Tryshasla», but the point is that here we don’t travel in invented country like Sanda, but as we held in our hands some fantastic music box. From the first track to the last one we are under the influence of some magic, I can’t name it in another way. All of these plates, harpsichords, maracas, mandalinas, harps, banjos, and a heap of another instruments, whose names are unknown to me, they sound like the real ones. Here, probably, the duet of Secede and Kettel is comparable with Plaid, who reached the same heights of melodic electronics, and it is called nothing but skill. I suppose, the only one doubtful number is «Pentimento», it is too prominent, even for such a multifarious album. And additionally I would like to say about the samples and the field recordings. During the entire 50 minutes, you can hear just a sea of sounds and they recorded as if they could be touch. For example, in «Deliria Noon», we hear barking of dogs, chirping of crickets, the sound of running water, some singing behind the wall. Here and there are constantly chirping birds, in the background something is stirring, moving, squeaking, squealing. It seems that the music lives its own life, and we just watch apart this beauty.

The highly anticipated release has fully justified the expectations. Definitely «When Can» can be placed next to such giants like as Secede's «Tryshasla» and Kettel's «Volleyed Iron». I don’t know how else express the delight of this album. We haven’t heard such music for a long time, and I think, that is a real gift so for fans of Sending Orbs as for all other electronics-lovers.

Sending Orbs | Kettel & Secede – When Can