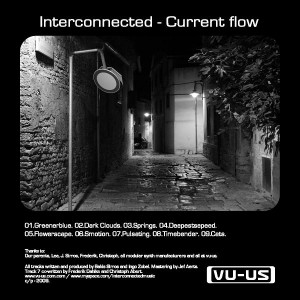 Interconnected is Bakis Sirros and Ingo Zobel, also known as Project Parallel Worlds and Dron accordingly, both are big fans of analog sounds and gears. The result of their collaboration was the album «Current Flow», released on the Belgian vu-us.

The first thing I would like to note in the «Current Flow» is how carefully and meticulously approached the authors to reconstruct the mysterious and somewhat mystical atmosphere. Album is covered night moods and some strange nostalgia, probably caused by the analog sound. In general, the concept and semantic filling is allright. As for the tracks I really liked «Timebender». This is a cocktail of sensations and emotions. By a slight touch of sadness mingled with all these mysterious arpeggio, gurgling, which echoes scattered by the sound track. It is a pity that all tracks not same. The album does not surprise some original discoveries and ideas in the technical aspect. No, all the sounds, of course, on the high level, but that's somehow never touches, very few moments when I say to myself  "oh, well this is cool sounds!". Maybe five years ago this album would have produced a great impression, but not now. Another amuse the final track. No wonder he is called «Cats», are there sounds, very reminiscent of meowing, even though they fully synthesized.

Total, we get a well-developed, but that goes without saying that the excellent atmosphere of the night and mystery, wrapped in a rather mediocre sound. And as a full analogue should have been some interesting and creative solution, but for me did not.