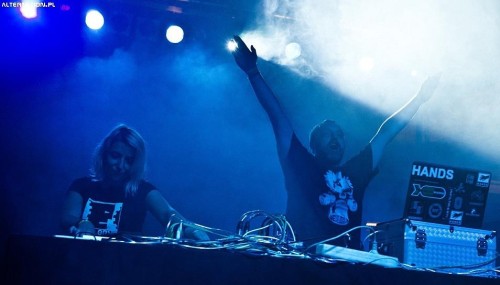 This is your first visit in Russia. The audience here is very different from western one, but there are some people who like such kind of music. What do you expect from your tour?

IVON and PAWEL: Yes, it’s our first visit in your country. Always wanted to come here and fortunately this time we have possibility to do it. We think, the audience is at one side different, but at other side is similar to ours, because fans of this kind of music are so intelligent and really great… This is the true audience! I hope people will like our style, strong bit and us ;) We play dynamic and rhythmic music like the other people do when enjoying it.

Ivon, what is Wieloryb for you — the way of life or just hobby and fun?

IVON: When I first met Wieloryb I thought that it’s a big potencial project, I was fascinated by its dynamism and authenticity. Now Wieloryb is a part of my soul, my nature and my style. Its sincerity and power impress me so much, so I can definitely say that it is the way of life.

Pawel, we know that Wieloryb played EBM in 90's. Tell us a little about the foundation of industrial scene in Poland.

PAWEL: In the 90`s here were almost five industrial bands and only one label in Poland decided to promote and publish this kind of music. It was the branch of German SPV. In country where pop and rock music dominated was not so easy to exist on stage, and beginnings were difficult. In 1994 WIELORYB was nominated to polish music award “Fryderyk”. Unfortunately, there were no categories for industrial music, so they nominated us in “Dance” category. We proved that it is possible to play noncommercial electronic/industrial music. We never have been much popular because it’s very hard to get to the European market, but we are the one of precursors and creators of polish industrial scene.

Do you know Russian industrial scene? Which projects do you like? Is such music popular in Poland?

IVON and PAWEL: We know Russian industrial scene a little bit and sometimes fans from Russia are sending us some examples of it, but TATLUM project is properly close for me. I know his music, and he’s like me. In Poland people know this kind of music because we are promoting industrial and noise styles here. There are some events and festivals – for example Antyscena Industrial Festival in Gdansk. We’re getting promotion for new, young talents, and we created our own Label and made special website for fans: www.antyscena.pl. But still audience here isn’t so big like at Germany or other countries of Western Europe, so we try very hard to change this situation, change attitudes and increase the size of the public.

Tell us a little about Antyscena and your radio

IVON and PAWEL: Antyscena radio is our, I mean, my and Pawel’s project. It’s idea is connecting people in the whole world who love industrial and noise music. We’re giving them strong good music and talking about artists and events. Sometimes we speak about some important things, giving comments on situations, trying to tell people that there are no borders in music and promoting tolerance. Our audience is people from various parts the world. It’s nice when after broadcast they’re sending us greetings from Mexico, Argentina, Russia, Maldives etc. I’m really pleased by it.