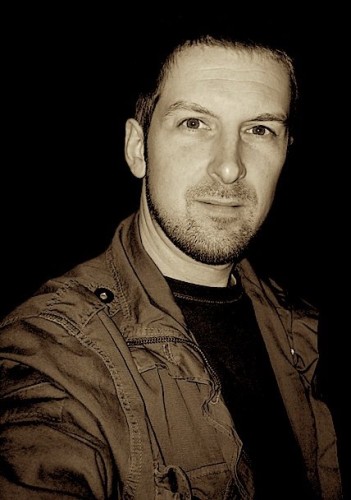 Please tell us about yourself, who you are and how you live. What do you do in your free music creation time?

Hi im Kev Spence from leeds England thats makes ambient electronic music under the name Stormloop i think its dutch for rush? it has a few meanings for me, as im a longtime fan of the rock band RUSH from Canada or it could just be ive recorded in the past the weather rain, hail, snow, wind etc...and used them in a 'loop' over my synths in my free music creation time? im not sure what that means but if i have any free time im usually messing with a synth or or my electric guitar,im not very good at guitar but ive always tinkered with guitars since i was young, but i do like to add alot of effects and make the guitar sound more like a synth.

What do you use for record: computers, synthesizers, programs?

I use a Apple Mac with logic pro and REASON and ive just bought the great soft synth 'omnisphere' which was used alot on my last album «Arctic conditions» i also have some real synths from Yamaha, Korg, Roland and novation i don't use them as much as i used to but every once in a while i will mess about with one, i never have them all set up at once, i use one at a time and if i think ive made something good i will record it into reason or logic pro and further process it and add more synth parts and effects.

The main question of this interview — why Arctic ambient, what in it attracts you?

like the season's autumn and winter best its when i feel inspired to make music and around this time of year im inside alot and i usually buy a new piece of equipment and just mess around with it until i come up with some interesting sounds, i was attracted to Geir Jenssens sound of Biosphere so he's a big inspiration altho i don't want to copy him note for note those early albums «Microgravity»,"Patashnik", «Substrata» and «Cirque» i was always listening to them in the winter months, i guess i just wanted to make some soundtracks for winter, the whole catalogue of glacial movements is really cool and being a fan of «Oophoi» was what attracted me to that label in the first place, although i don't know how long it can last to keep making winter themed ambient music.

What is different from the arctic ambient and the usual ambient?

Its just based around themes of winter the atmospheric conditions suit this type of music very well, the mysterious fog and ice, that uncertain we've lost our bearing and can't see the road for snow its all a fantasy about been lost, like the way a snowfall can change the whole landscape over night i guess other types of ambient fall into the space theme or ethnic theme i mean steve roach which is another big influence, makes ambient in the desert but i guess its the big canon of open spaces he is trying to show us in his music.

In the description of the album «Snowbound» I read that the music was created during a heavy snowfall, which lasted two weeks, and you are inspired by this, while at home in the warm and cozy composing music. This is a beautiful story about the creation of one of the albums, or is it true?

Yes its very true it was the winter of 2010 it was christmas time i had the lights out only the glowing of LEDS on my synths and just watching it every night into the early hours seeing the snow get deeper and deeper and wondering when it was ever going to stop! it was just great cause i didn't have to go anywhere i had food in the house and no work for two weeks so i was like let it snow let it snow!

Were you in the Arctic, and what you think about it?

If to look at your discography, you do music for a very long time, you have a lot of albums, but they were all on the Internet labels, why? You do not trust the labels?

No, i like real cd's and labels its just i don't have the money to release every album i make and Bandcamp is a great platform to put my latest works up on i mean take say my album 'signals' i think i finished making all the tracks one friday and by the next night saturday i had uploaded all the tracks and artwork and people were downloading it, so its very easy and fast for me and i like that, but it is very nice to hold a cool digipak in your hands, it just takes more time and more money!

In your opinion what is happening in the music world, mark do you have any trends for yourself or maybe you have a surveillance as evolving music, does it, or something else happens?

I think its a great time for the music in the world more people are making music its become more accessable to anyone that wants to have a go so yes there more music more bad music! but also lots and lots of great music! music has to evolve over twenty years ago i was playing bass in a heavy metal band and i had no plan or idea i would change to synths and make albums, it was just i loved music so much i wanted to have ago myself and if you can see new trends in music and it moves and inspires you im all for that, i often wonder what i will be listening to in the future? will i still be buying ambient music? and still be trying to make it? or perhaps there will be some new machine that everyone is buying and making music with i once saw a star trek episode in which there was such a device you just held it in your hands and it made music of your soul or something or the song within who ever held it, i thought that was kinda a neat idea!

In what conditions, in your opinion, should listen to your music? For example, I live in the Arctic Circle, we have a lot of snow in the winter, there are northern lights and heavy snowfalls, so I literally feel the skin of snowflakes and the general atmosphere of your album. And what about those who live in more southern climates?

Some people don't understand what im trying to do and say thats not music! its just noises and weird sounds! in which i always smile or laugh i say your not listening to it in the right conditions, i try to make music to fall asleep to, to start with for myself, its late night stuff going to bed music, for quiet times or that long lonely train journey home from work, or maybe you can sit and work at your desk and use it as background music? Well not all my albums are about winter some are about space and the vastness of it so i guess you could still listen to it in southern country's and dream and 'watch the stars or something!

What do you listen to at home? Please tell us about your musical tastes?

I do in general listen to alot of ambient or electronic stuff but when i get bored of that i will play some indie stuff or rock i do listen to alot of different styles not just electronic music if something catches my ears and i like it i buy it whether it be pop, rock, jazz, classical, folk, techno...whatever.

Now the international community is increasingly eyeing the Arctic as to the largest repository of natural resources. Already, world powers are arguing over who will develop the field. What do you think of all this?

Im sorry i don't know enough about this! so i can't really give my views on it... Your music, it for travelers in itself, dreamers for whom music creates a background for their imaginations? Im hoping its a more modern day 'new age' music so yeah for people that want to dream, relax and chillout for people who daydream and let there minds wander and perhaps for insomniac's to fall asleep to.

In Russia, 64 percent of the occupied northern areas that you would like to wish our listeners?

Its nearly halloween so happy halloween! and happy new year! im sorry i don't really understand this question either? is this a radio show?? im sorry i don't understand what you mean?? but just to let you know im making new tracks for a album that will be out on the ...txt label hopefully sometime in spring 2014 its not a winter album this time its back to a space style theme in the same way as 'back to dust' 'signals' and 'transforms' albums...