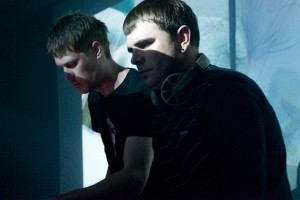 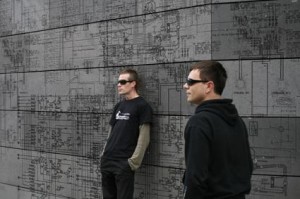 Greetings, Atmogat, I'd like to congratulate you with releasing a new album. Tell us a little about yourself. I know that you have a quite long time on the scene. How your duo was formed and what word Atmogat means?

Thank you very much. To form Atmogat results from a spontaneous idea. We played music as deejays mostly on illegal party. After some years we wanted to go deeper, a development which many people succeeded, if they occupy themselve with music. 2001 we fixed the idea and founded Atmogat. Our artist name is a combination of two words. The same way Juan Atkins did it with Cybotron. Atmosphere + aggregate = Atmogat. The idea behind is to create atmosphere by using electricity which you can feel and of course hear. The aggregate in this case is the engine producing electricity which keep things in motion.

Could you explain why your the first LP was released just now? How long it was created and what has inspired you on its creation?

We have a high claim for what music should transport and we don't want to take any track we finished. We have chosen tracks which reflect us as best. This includes that these tracks contains many of our personality. That's the reason why some of the finished tracks must wait years to be released. What has inspired us mainly is life. Many events and experiences we have made are expressed in our music. Further inspirations are other great musicians from the electronic music scene who incite us to create new music structures.

«Trigger Event» has seemed to me a conceptual album, but I have not caught an essence. Do you put any sense in names of tracks, in their sounding? Or have you preferred to leave the listener alone with the imagination and your music.

«Trigger Event» is definitely not a conceptual album. Some titles reflect the sound of the track f.e. «Indian Summer» and other tracks are titled by the feeling which we had over the time of the production. Some track titles are creations without any meaning.

How does your a creative process? Do you together work over creation of each track or bring each contribution separately?

Mostly a track is produced by one of us. If its finished we exchange opinions and sometimes took ideas from each other and realize them before we say this track is finished.

What's more important to you in the music, the emotional component, the technical side and something else?

Exactly both, the emotional components added to futuristically programmed rhythms.

You also had your own label Trachanik Records, which released Einoma and you, why it closed?

Unfortunately, we didn't have the financial background to keep things going. Furthermore, we don't have the time to support the artist as professional as it should be. It's difficult to produce good music, but it's even harder to sell it.

Danny, you have a side project DNN, your album «Try To Feel» seemed to me very interesting. Does you plan to continue work on this project?

Yes, I try to continue but I don’t have a real plan and it’s not my intention to establish myself as solo artist. The album „Try To Feel“ was produced in a time filled with many changes and questions which I had for myself. I often felt insecure and I used music to express or better speak about all these feelings. My life is structured now and I’m grounded. This is good on the one hand but on the other hand it seems that I don’t have anything to tell through music. Anyway, I’m still working on tracks although it’s not easier now. So, it will take me a while to finish it, hopefully in 2010.

Your music sometime is pretty dark. In your life, are you also the same dark? :)

Not really. We know that our music sounds not very happy and we often hear that people interpret our music as dark. We still try to leave a slight touch to sound harmonically. And from our perspective the music sounds more seriously than dark.

When we can wait for your next album? Are you working over something?

There is no release date scheduled for the next album. We permanently produce music, but we can not say if the next album will come in one year or three years.

Do you plan to tour in support of «Trigger Event»? And if so, will you visit Russia?

No, there's nothing planed. We have played in Berlin and included tracks from the album. At the moment no further live performances are planed except one gig in August this year here in Germany.

If you had the opportunity to work together with any musical group with whom you would like to do this?

Both of us got love for the music by Quench, Hecq, Subheim, but also Radiohead and further ones. Actually, we have problems to work continuously on our project. So it's very difficult to work efficiently with other artist.

Is it possible to tell with confidence, that music is your life or you do something else?

Music is very important to us, but to keep it independent we have to do other jobs. Toni work as freelancer specialized in grafic and web design and Danny works for the united service union supporting employees rights.

Thanks that have found time for me. I wish you successes in creativity and inspiration. I hope you'll continue to make the same beautiful and amazing music.

Thanks for having interests and for giving us the opportunity to talk about music.